Memorial Day weekend is upon us, and I would love to honor all of my ancestors that have served our country. There are several to choose from with involvement in the Revolution, War of 1812, and the Civil War. You will see all of those stories in time on this blog, but I decided to start with a story that is a bit more recent.

My father, Robert Gordon Scribner, attended Virginia Polytechnic Institute in 1942 where he joined the Engineers ROTC. While at school that first year, he was recruited for the Navy V-5 Aviation Cadet program.  He took and passed the entrance exams, but before he could join the program, he needed permission from his parents. Against his mother’s wishes, his father, Henry Dickinson Scribner, signed approval for Robert (known as Bob), at 19 years of age, to enlist on December 14, 1942 in the V-5 Naval Aviation program.

Beginning training in 1943, Bob first went to Colgate University in New York, and the cadets were subsequently sent to Hickory, North Carolina, Athens, Georgia, St Louis, Missouri and Corpus Christi, Texas.  On June 13, 1945, Bob graduated from the extensive training program that saw over 50% of the cadets in his class wash out.  He was finally a naval aviator and he took his commission in the United States Marine Corps as a 2nd Lieutenant.  After his wings were “pinned”, Bob was assigned to a squadron based in Miami, Florida as a pilot of an Avenger Torpedo Bomber during the final months of World War II.  Bob’s next assignment was to a carrier air group stationed at the Marine Corps Air Station (MCAS) in Santa Barbara, California where they cruised the Pacific aboard the USS Mindora for several months taking off and landing from the carrier at sea.

By 1948, Bob was on the Atlantic coast stationed at Quantico, Virginia flying the Vought F4U Corsair, Grumman F4F Tigercat fighter, F7F Tigercat fighter, and R4D transport planes.  At Quantico, he met his future wife, Ann Hart Hughes, and they were engaged just before the Marine Corps sent Bob to Tsingtao, China where his squadron flew railroad patrol in northern China.  By the end of 1948, while Bob’s squadron was in Tsingtao, Peking fell to Chinese nationalist forces led by Mao Tse Tung.  And by March 1949, the squadron was forced to leave as the communist forces were on the move.  Bob’s squadron joined a carrier between China and Okinawa, Japan, then went on to Guam, then San Diego, and finally arrived at the MCAS in Edenton, North Carolina by May of 1949.

On August 6, 1949, Robert Gordon Scribner married Ann Hart Hughes in Norfolk, Virginia.  They purchased their first home for $6,600 in Edenton, North Carolina where Bob was stationed at the time.  By 1951, he was transferred to the MCAS at Cherry Point, Virginia where Bob’s squadron was sent to the air carrier, USS Oriskany in the Mediterranean Sea.  For the next six months, they visited Italy, Sicily, Crete, Greece, Turkey, Libya, Malta, Gibraltar and France.

In January 1952, Bob’s squadron was deployed to Pohang and later Suwon, South Korea flying the Grumman F9F Panther jet and the Boeing F-86 Sabre jet into combat.  While in Korea, Bob flew over 70 combat missions.  Most of his missions were interdiction missions, cutting rail lines, and close air support.  He and his fellow Marines spent the harsh Korean winter months in 4-man tents with a stove in the center.

It wasn’t all smooth flying.  In Bob’s memoirs, he recounts crashing a plane in February 1952, while in South Korea.  Bob was flying a plane…

“that had just come out of repair.  I was only airborne about 10 minutes when I noticed fire by my feet.  I tried to call the tower and then realized that the fire had melted all my electronics including my airspeed indicator and radio.  I maneuvered close to the field to eject and found out the fire had also melted the lines to the canopy ejection system.  Unable to eject, my only choice was to put the aircraft down on a 3600-foot runway or the beach.  I elected the runway because I knew I needed someone to get me out of the aircraft. I could not lower my flaps, speed brakes or landing gear.  Not having any airspeed indicator I did not want to stall out and spin in so I held a lot of speed, people who saw it guessed 200 knots, and jammed it down on the very start of the runway and started shedding parts; tip tanks, wings and tail.  I used the whole runway and then some and came to rest about 200 feet off of the end of the runway. I started to take my 38 cal. Smith & Wesson, that we carried all the time, and try and shoot a hole to escape through in the canopy when an ordnance man, Cpl DeAngelo, saw my predicament and picked up a big rock and busted the canopy and hauled me out just in time because after we had moved about 50 feet from the fuselage the ejection seat blew.  About that time the Chaplin came over to the crash site to give the pilot ‘Last Rites’ as he knew he could not of survived that crash.  I ended up with just a cut on my chin that took the Flight Surgeon three stitches to fix.”   – excerpt taken from “Robert G Scribner Remembers”

Though eligible, Bob refused to let anyone complete paperwork for a Purple Heart after he got his three stitches on his chin.  He didn’t want his wife, Ann, to somehow get word that her husband had been wounded.

While serving in South Korea, Bob was awarded the Distinguished Flying Cross. 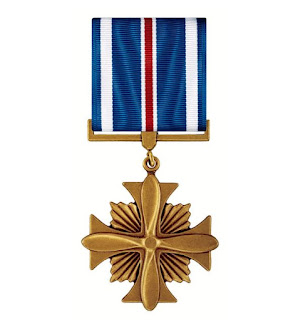 For service as set forth in the following:

CITATION:   “For heroism and extraordinary achievement in aerial flight as Pilot of a Plane in Marine Fighter Squadron THREE HUNDRED ELEVEN during operations against enemy aggressor forces in Korea on 13 February 1952. Participating in a close air support flight in the vicinity Tosan, First Lieutenant Scribner carried out a series of devastating bombing and strafing attacks in the face of intense automatic-weapons fire against a concentration of enemy trucks and troops shielded by revetments and surrounded by automatic-weapons positions, personally scoring three direct hits and contributing materially to the damage or destruction of twenty hostile trucks. Diving repeatedly through the enemy fire, he persisted in his attacks until all ordnance was expended and neutralization of the staging area was assured. By his marked courage, skilled airmanship and devotion to duty, First Lieutenant Scribner was greatly instrumental in dealing a damaging blow to the enemy and upheld the highest traditions of the United States Naval Service.” – For the President, Secretary of the Navy. 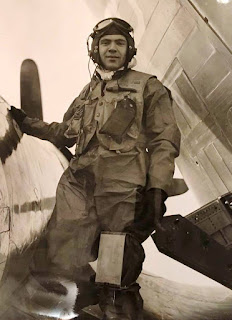 As a member of the Distinguished Flying Cross Society, Robert G Scribner’s name is inscribed on the Wall of Honor located along a tree-lined walkway leading into the Smithsonian National Air and Space Museum's Steven F. Udvar-Hazy Center located in Chantilly, Virginia.

Bob Scribner had a long and interesting Marine aviation career until his retirement in 1963 with over 500 carrier landings to his name.  He served in the United States Marine Corps for 21 years before his retirement at the rank of Lieutenant Colonel.  Bob’s last assignment was as the Commanding Officer of Headquarters and Headquarters Squadron at the Marine Air Station in Yuma, Arizona.

Notes:
I plan to share more of the life story of my parents, Bob and Ann Scribner in a future blog post.

Research into the early life of Irish immigrants is challenging, and seeking information about my Irish 3rd great grandmother, Margaret Smith, was difficult.  For many years I only knew that she immigrated to New York before 1850 with her husband, John Smith, and children.  Of course, having the name of Smith didn’t help, and the name of her husband, John Smith, proved even more difficult to research.  Censuses provided the names of their children beginning in 1850, and eventually led to discovery of the family arrival in New York in September 1849.

Margaret Smith’s 1881 Brooklyn, New York death certificate didn’t reveal the names of her parents.  But it did record that she was 80 years old when she died.  Finding her obituary was the first crack in my brick wall for her.  The 1881 obituary found in the Brooklyn Eagle newspaper read:

Margaret’s exact age differed on these two documents related to her death.  But the real gem is that the obituary reveals her sibling relationship to “the late Rev. P. O’Neil.”  Margaret Smith just became Margaret O’Neil Smith to me.  More research indicated that P. O’Neil was a much-loved Brooklyn Catholic priest, Patrick O’Neill, born in Cavan County, Ireland.  Rev. O’Neill died in 1867.

And yet, the most amazing discovery is that there were, at the time, two different family trees online that had sibling lists that matched up very closely to the names in the probate papers.  One version, came from an early typed list titled O’Neill Family.  It had been handed down in the O’Neill family descended from William O’Neill.  The other version came from a family bible that is since unaccounted for, but the sibling list had been transcribed and put online in a Gustaf family tree descended from Ellen O’Neil McGaughran.  Both lists included only the names and birth dates for the siblings; and both lists were almost identical.

The next step, of course, was to look for the family in the 1821 Ireland Census.  And John Neal was found in the census as a farmer & carpenter living on 6 acres in the townland of Corcloghan, parish of Castleterra, Cavan County, Ireland.  His wife was Ellen, and at the time in 1821, the following children were living at home:  John, Catherine, Charles, Mary, Robert, James, Bridget, William, Ellen and Patt – all names also on the sibling list.

Many of the O’Neill children that we now know about grew to adulthood. Yet times were tough in Ireland and it wasn’t surprising to find that so many of the siblings, about half, set out to make a life in America.  It is probable that John Neal’s carpentry skills were as a wagon maker or wheelwright.  One son, Charles was known as a wheelwright, two sons, James & William, were known to be carriage makers, and one son-in-law, John Smith (my 3rd  great grandfather & Margaret O’Neill Smith’s husband) also had a carriage making business.

With the exception of Charles O’Neill who emigrated with his family in 1828, most of the siblings that came to America settled in the Brooklyn, New York area.  The family members settling in New York all arrived in the second half of the 1840’s and included Catherine, Margaret, Mary, William, Ellen and Patrick.

Notes:
There are so many interesting stories about the O’Neill siblings and their families that I don’t have room here to share them all in this post.  At some point, I will probably do a story for this blog on my 3rd great grandparents, John Smith & Margaret O’Neill Smith, their family, and their immigrant experience in Brooklyn.

Some readers might recognize their ancestor among the siblings.  If so, I would love to hear from you.  I have connected with several cousins in the past as we found our link and shared information. It is always great fun.  Please feel free to contact me.  I’m happy to share what I know and help to put the puzzle pieces together.