It’s interesting, but not unusual, to find a cluster of families that are related living in the same geographic area for several generations.  One of those instances for my family is the area of New London, Connecticut.  And another bonus for me is the rich historical documentation that is also available for early New London.

One of my New London family lines is the Hempstead family.  Joshua Hempstead (1678-1758), my 7th great grandfather, kept a diary for almost half a century.  And as you might expect, the diary is rich in information about his family even though the entries are typically quite brief.  The Joshua Hempstead Diary 1711-1758, first published in 1901 by the New London Historical Society, is a treasure trove of tidbits of everyday life in colonial Connecticut. 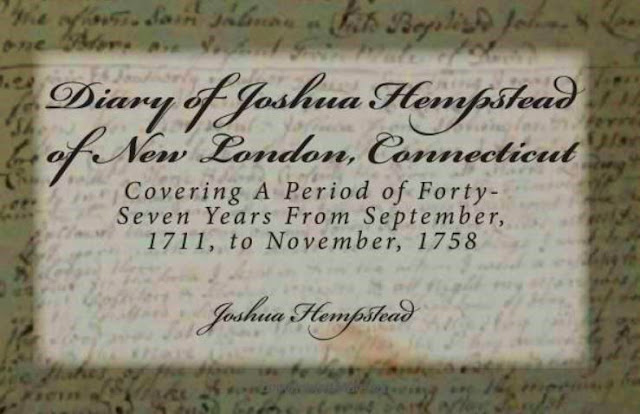 Joshua Hempstead had a wide variety of occupations and interests during his life.  He was primarily a farmer, however he was often involved in other activities that contributed to the family income including surveyor, carpenter, attorney, stone-cutter, sailor and trader.  Joshua also served the community as a justice of the peace, judge of probate, executor of various wills, overseer to widows, guardian of orphans, and a consultant and advisor to many.  As a 3rd generation Hempstead in New London, he was related to most everyone in the area and his Diary includes entries that mention many family and friends throughout the New London community.  Joshua’s 47 years of almost daily entries filled over 700 pages with facts, remarks and commentary.

I read through The Joshua Hempstead Diary noting entries or comments about my own ancestors.  Of course, many comments were included that mentioned Joshua’s immediate family:

5 Aug 1716, my Dear Wife Died about half an hour before Sunrise.  I was at home al day except in the Evening I went to ye burying place.

11 Aug 1716, I was home al day Except going to ye funerall of my dear Child who was Interred by his Mother about 2 or 3 of ye Clock afternoon.

29 Aug 1716, I was about home mending fence & looking after Abigal who Remained very ill.

16 Nov 1731, I went with Mr Woolsey to Brother Salmons and then toward night with Brother to get Mr Lamb to Marry John.

17 Nov 1731, John & Hannah Salmon were married toward night a housefull of People & Stayed to play till midnight

I was pleasantly surprised when I found quite a few comments about another of my family lines, that of James Smith (1704-1758) “the Barber”, my 6th great grandfather:

12 Nov 1756,  I went over to Jno Hempsteds & had Leave to marry their Daughter Abigail (She being pregnant) to James Smith Son of James Smith the Barber.  I married them att John Griffings in the night after 9 oe Clock &c.

3 Aug 1758,  James Smith the Barber buryed Died yesterday.  he was a Decriped man.  he had the numpalsie I Supose 20 year ago & Never had the use of his limbs Since.  a poor man in the care of the Town Eptr B.

14 Jul 1739,  John Rogers the Son of Joseph Rogers was buried Died this morning having had the measels the fevar & flux afterwards aged 60 odd.

Joshua Hempstead, the diarist, was the grandson of Robert Hempstead who was believed to be one of 36 grantees of original house lots in the settlement of New London in the mid-1600's.  Joshua was one of 9 children, his father’s only son, and he inherited his father’s homestead.  He married as a young man and had 9 children of his own before his wife passed away a few days after the birth of his last child.  Joshua never remarried.  He worked hard to support and raise his family with the help of relatives and hired help.  Joshua’s diary entries ended only 6 weeks before he died at 80 years of age.

There are plenty of Hempstead family members and events mentioned in the 47 year span of Joshua’s Diary.  Several other of my family lines also mentioned in various diary entries include the surnames of Larrabee, Rogers, Colver, Dayton, Bailey, Salmon, Smith, Bill and Chapman – families living in New London in the 1700’s.

All of these surnames and family branches connect in later generations to my Dickinson and Hale lines on the Scribner side of my family.