My Granny, Nina Cecelia Nash Hughes, was born in 1896 in Waterford, New York, the second child of Maurice Nash and Mary Ann Hart Nash.  When Nina was quite young, her parents divorced, and Nina never knew much about her father.  The divorce was not really ever discussed, and was assuredly somewhat of a scandal for this Catholic family.

I have never been able to find the Nash divorce record, but the divorce was sometime before 1900.  Maurice is found in June 1900 in Amsterdam, New York in the census with his second wife, Ada Mercer Nash.  They were married in November of 1899.  Maurice’s occupation at the time was as a spinner in a mill.

In the same 1900 census, Mary Ann is counted in June as married and living in Norfolk, Virginia with her second husband Joseph E Watson, and like Maurice & Ada, they had been married for less than a year.  I don’t have the dates of their marriage, however Mary Ann & Joseph had a son, Edward Philip Watson in late August of 1900.  I also remember my mother telling me that Maurice had a daughter born about the same time.  There is a story there – probably two stories. 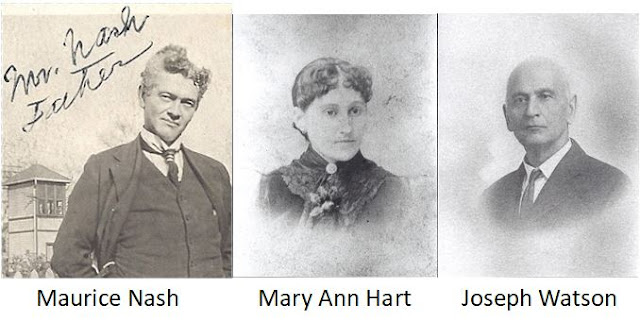 Maurice also appears in the City Directory for Amsterdam, New York in 1903 as the proprietor of Rockton House, a “bar stocked with choice wines, liquors and cigars.”  News stories for early 1903 tell that Maurice installed a moving picture machine at Rockton House that showed “moving pictures and illustrated songs.”  However, by June of the same year a news story reports that Maurice is missing, Ada doesn’t know where he has gone, a number of creditors are looking for him, and Ada is closing the hotel.  Two years later, the 1905 census shows that Ada still is with Maurice, however they are living in Schenectady, New York.  I can’t find Ada with Maurice after 1905.

Nina’s mother, Mary Ann, and Joseph Watson had another child in 1904, Louise Estelle Watson and the couple raised all four of the children in Virginia.  Maurice Nash was the father of the two oldest, and Joseph Watson was the father of the two youngest.  Sadly, Edward Philip Watson died before his twentieth birthday in an auto accident.  During all of her life Nina, my Granny, had a very close bond with her younger half-sister, our Aunt Louise. 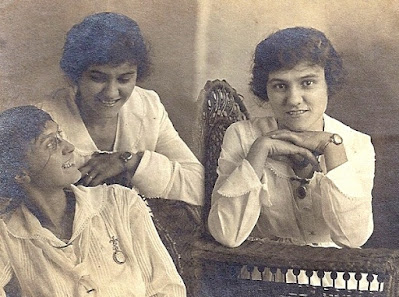 Even though Nina’s parents were divorced and remarried, she was raised in a Catholic home and was a practicing Catholic all of her life.  She married Charles Henry Hughes in 1920 and he was not a Catholic.  Most of my memories of my Hughes grandparents were during their later years, and I remember that Granddaddy would drop Granny off at the Catholic church to attend mass with us on Sunday, he would attend the Episcopal church only a block away, and then join us all for lunch after mass. 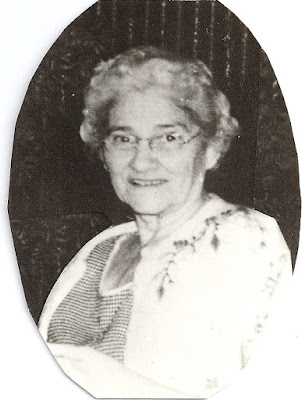 Nina & Charles were married for 52 years, and had two daughters.  They lived in Virginia for most of their married life, but moved to New Mexico for their last years together.  After the death of my grandfather, Granny spent the next 5 ½ years living with my family in New Mexico in the summer, and with my Aunt Teene’s family in California in the winter.

Granny holds a place in my memory as one of the kindest and gentlest people that I have ever known.  She showed us every day that she loved all of us with no favorites and no demands – a true unconditional love.

The First Scribner in America

John Scriven, born in 1623 in Wem, the county of Shropshire, England is believed to have arrived in the American Colonies sometime before 1652.  By 1662, John had settled in the colony of Dover, New Hampshire where it is recorded that he had a small farm of 20 acres and paid taxes.  The inventory of his possessions when he died in 1675 included “a hay barn with 20 acres of land, animals including 2 oxen, 4 cows, 1 calf, 3 sheep, 1 mare, 1 yearling colt and 6 hogs, farm implements, household goods, 1 musket and 1 sword.”

John Scriven was a young man when he arrived in America, and we don’t know if the reason for his journey was a desire to be a part of England’s colonization efforts, if he wanted to flee religious persecution, or possibly a desire to avoid fighting in political wars.  It is has been speculated that he might have first arrived in Barbados as there is record of a John Scriven as an early inhabitant of Barbados in the mid-1630’s.  There was a political reason to sail to Barbados before coming to New England.  At that time, emigrants with passage from England to New England were required to take an oath of allegiance and religious conformity before leaving England.  However, if sailing to Barbados, no such oath was required.

John Scriven and his wife, Mary (maiden name unknown) had at least 4 sons, John Edward, Thomas and Samuel, and 1 daughter, Elizabeth.  It is with this 2nd generation that the surname appears to have changed from Scriven to Scribner.  All of John Scriven’s sons began using the name of Scribner.  Our line comes through the eldest son, John Scribner.  There is some thought that the name change could have been prompted as a means of distancing the family from King Charles and their English legacy.  Another theory was that they didn’t want to be mistaken for the family of Rev. William Scriven who was not related, but was well known in New England, or it could be as simple as the family wanting to establish a new identity in Colonial America.

John Scribner (1657 – 1738), the eldest son of John Scriven, was a blacksmith who grew up in a time when the Colonies were expanding and there was conflict with Native American Indian tribes.  He and his wife, Elizabeth Cloyes Scribner who was also born in Dover, lived on the Dover property that John inherited from his father until 1698.  At that point, John sold his Dover holdings and moved with his family to Exeter, New Hampshire where he purchased about 200 acres and some swampland near the Exeter River.  The Exeter Town Hall burned in 1870 destroying most of the vital records of the town.  However, we know from John Scribner’s will which survived the fire that he and Elizabeth had sons Joseph, John, Samuel and Edward, and daughters Elizabeth, Mary, Abigail, Susanna and Sarah.

Our Scribner line descends through John’s fourth son, Edward Scribner (1696 – 1756) who married Abigail Leavitt (1699 – 1736).  Edward and Abigail’s children were the 4th generation of Scribner’s to live in the Colonies, and their youngest son, Samuel Scribner (1735 – 1815) fought for our nation’s independence in the Revolutionary War.  Samuel Scribner and his wife, Sarah Bucknell Scribner, are my 4th great grandparents. 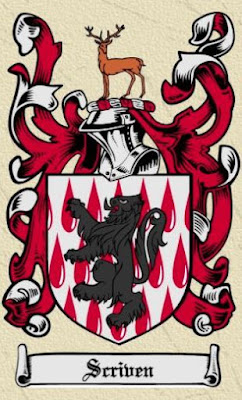 I really haven’t tried to do any research on the earlier English ancestors in this line, however, it is believed that John Scriven “The Immigrant” (1623 – 1675) might have been a son of Sir Thomas Scriven of Shropshire (1584 – 1644) who was knighted by King Charles on 29 September 1642.  Thomas was the Lord of Frodesley Manor in Shropshire county from 1631 until his death in 1644.

My blog sponsor, Blogger, has had a feature that allows followers to "subscribe" and get email alerts when I post a new story.  They recently notified blog editors that this feature will end this July.  Since all of my subscribers are family & friends, once that happens, I will simply begin sending subscribers an email to alert you when I make a new blog post. Thus by mid-summer, the notification emails (typically twice a month) will be coming directly from me instead of from Blogger.

Sharing our family history was a project that I had been rolling around in my mind for many years, but it always seemed to be too overwhelming until I decided that a blog format would allow me to tackle this project in small bites.  During a year of COVID distancing and lockdown I found that I finally had the time to work on it.  I hope that you enjoy reading these vignettes about individuals on the various branches of our family tree as much as I enjoy researching, writing, and sharing them with everyone.  I can't believe that I have been doing this now for over a year – and there are still plenty more blog posts to come!