Dangerous Fire Aboard a Clipper Ship

Previous blog posts (Visits to Pitcairn Island, August 2020, and Ships’ Logs from the 1870’s, December 2020) introduced you to Capt David Alba Scribner, my great grandfather.  His last sea voyage was on the clipper ship, Henry B Hyde, and unfortunately, it was the most difficult sea voyage of his career.  David was at the end of a forty year career as the master of many sea voyages including forty-three hazardous trips around the cold and bitter Cape Horn of South America. 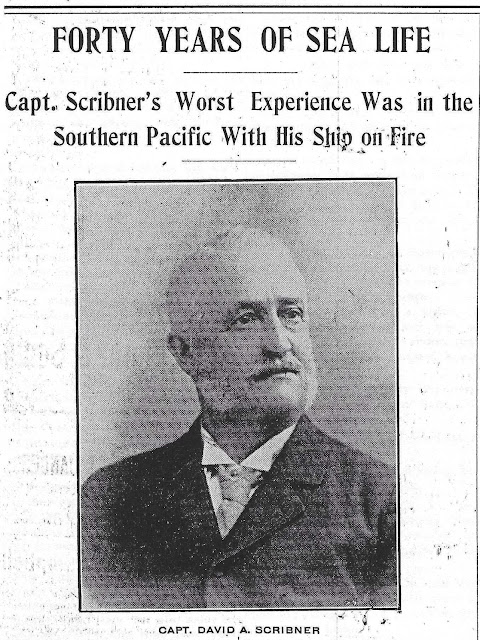 In late 1899, Captain Scribner sailed the 2,500 ton clipper ship, Henry B Hyde, from the port in Norfolk, Virginia with a load of coal to make his way around the Horn and then on to Honolulu, Hawaii.  A Brunswick, Maine newspaper account, recalls that during the voyage the coal in the hold of the ship caught on fire, and the ship was at risk of sinking if the fire burned through the hull:

“It is a singular fact that that the last voyage made by Capt. Scribner brought to him the worst experiences in his sea-faring career.  Having sailed out of Norfolk on the Ship Henry B. Hyde with coal for Honolulu, he was off Cape Horn when he found that the ship and cargo were on fire, the result of spontaneous combustion.

Over a thousand miles from the nearest port and in latitude famous for its gales, the situation was a most desperate one.  Capt. Scribner set at work throwing the coal overboard to get at the fire, but after two days of hard work, the smoke and gas made it impossible for the men to live below decks, and he headed the ship for Valparaiso, Chili, 1400 miles away.  It was a battle for life.  While constantly prepared to take to the boats, the heavy weather made such a course suicidal and they kept up the fight.  Ten days after the fire was discovered, the ship arrived in Valparaiso.  Capt. Scribner had burned his hands severely and lack of suitable care resulted in blood poisoning.  The surgeons told him that amputation of his hands was the only thing that could save his life, but Capt. Scribner thought differently and recovered without their assistance.

Having arrived in port, they filled the ship as full of water as possible, and drowned out the fire, which was mostly in the bottom of the ship.  Two thousand tons of coal were discharged to ascertain the damage, and it was found to be more serious than was anticipated, but the ship was allowed to proceed to Honolulu, her destination, with half of the cargo.

After repairing the ship in Honolulu, Capt. Scribner turned her over to the California owners who had bought her while on the passage out.  He took steam passage to San Francisco and came home.” – excerpt from “Forty Years of Sea Life” news story in the Brunswick Record newspaper; October 2, 1903.

Another newspaper accounting of the tragic voyage records that “Capt. Scribner deserves great praise for getting his vessel into port against the most adverse conditions, and thereby saving the entire crew.  For many days they, captain, officers and men, were all fighting the fire in the cargo, and a furious gale blowing all the time.  Cape Horn is justly the sailors’ terror.” – Sailors Magazine, May 1900. 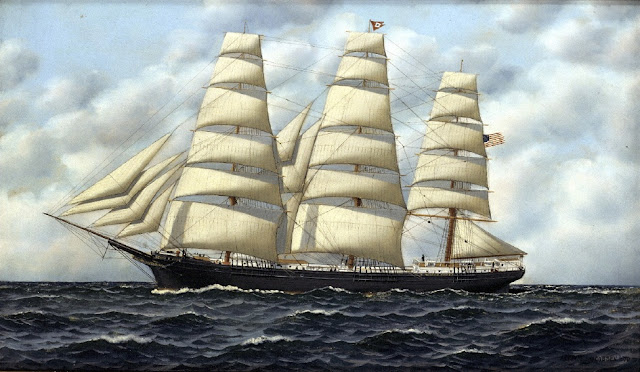 The clipper ship, Henry B Hyde; an oil painting by Antonio Jacobsen, 1896; http://blueworldwebmuseum.org/

In one of the letters that David sent from Valparaiso to his wife, he told her that even after having been docked a week they had only unloaded a fourth of the cargo and the burning coal that remained on the ship was still “burning as bright as ever you saw in our furnace” in half a dozen places and required repeated calls to the water boat to continue trying to drown it out.  His letter tells that they had put 9 ½ feet of water inside the hold of the ship by the second week of fighting the fire while in port and still didn’t have it under control.  It must have been tricky to try and put enough water into the hold to put out the fire, and yet not sink the ship.

Born in 1840 in Topsham, Maine, David had gone to sea by the time he was twenty-years of age.  He was the eleventh child and the youngest son of Deacon David Scribner and Islethera Howland Scribner.

For thirty-five of his forty years as a mariner, David A Scribner sailed ships belonging to the Chapman & Flint companies of Maine and New York.  Captain Scribner sailed many of their ships and often shared an ownership interest in the vessels.  Ships under his command at various times were the St Charles, St Lucie, St John, St David and the St Frances which he sailed for a dozen years.  Benjamin Flint, of Chapman & Flint, was married to Frances Ellen Scribner, David’s sister.  The two families were lifelong friends and in the early years, the Scribner and Flint families lived near to each other in Maine, and later again in Brooklyn.

Captain Scribner often sailed a route from eastern seaboard ports or from Liverpool, England southward, around the Cape Horn, and then north to San Francisco, often stopping in Hawaii to exchange goods for sugar – and then back again. David’s mariner career included many hazardous trips around the cold and bitter Cape Horn.  He also engaged in the California trade transporting goods between various ports in Japan and back to San Francisco or Puget Sound. 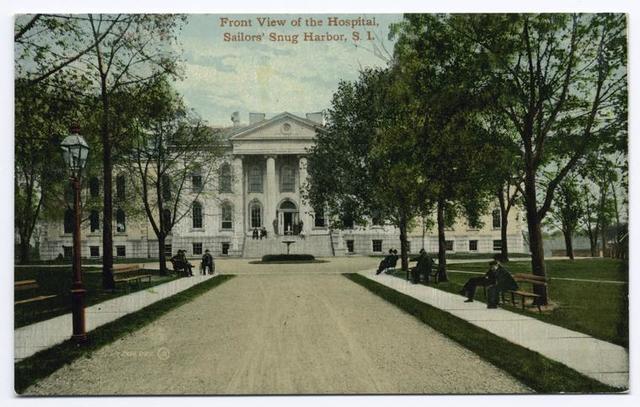 By the time of his retirement from the sea in 1900, David and his family were living in Brooklyn, New York.  He became a Trustee, and later Governor, of a retired sailor's home known as the Sailors' Snug Harbor, located on Staten Island, New York.  Snug Harbor opened in 1833 as the first maritime home and hospital for retired seamen in America. The seamen were provided a home, food and healthcare in the company of other retired seafarers. In 1900, over 1,000 men lived at Sailors’ Snug Harbor.

David Alba Scribner was a true mariner with a love for life at sea.  He was quoted as saying, "I have friends all over the world, and, if I had my life to live over again, I would choose the same profession that I followed.  In my forty years at sea I have seen a good many shipmasters, and, as a class, I have a great deal of respect for them."

Captain Scribner’s wife, Virginia, sailed with him for seventeen years, going around the Cape twenty-one times with him.  Their three young children also sailed aboard Capt Scribner’s clipper ships in the family’s younger years.  The children were schooled on board ship during that time, however, when their eldest, Henry, was 12 years old, David & Virginia decided that it was time for the children to attend public school, and they settled in Brooklyn, New York.  David sailed without his family for eight more years before his retirement.

Virginia kept a sea journal of her travels with her husband and young family, and I will share that in a future blog post.

Who is Benny Scribner?

Benny Scribner has been referred to as the adopted son of Captain David A Scribner.  There was never a formal adoption, but Benny assumed the name of Benny David Scribner, and David cared for Benny for many years of his life.  Much of what I have discovered about Benny was written in either books or news stories – and his story is an  interesting one.

Captain Scribner discovered Benny in 1874 on a beach in a South American port.  Captain Scribner was at the time in port on the ship Abner Coburn, and invited Benny to join him as a steward on the ship preparing meals for the crew.  Benny was a Chinese boy about twelve years old at the time and was an orphan making his way on his own. Benny claimed to have never known his parents, and he believed that he was born in Singapore.

David married two years after Benny joined him aboard the ship, and for the next dozen years Benny was regarded as a part of the family by David’s wife, Virginia, and the Scribner children who all also sailed aboard ship with Captain Scribner on his voyages. 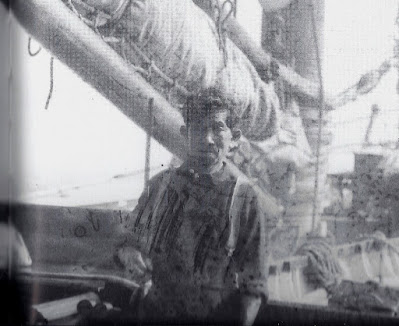 Benny sailed as a steward on voyages with Capt David Scribner for the next 26 years until David retired from the sea in 1900.  At the time that Captain Scribner retired, one news story said that he had owned an interest in a ship called the J. B. Walker.  Scribner sold his interest in the ship to a friend, Captain George Wallace of San Francisco who assumed command of the ship.  By agreement of all, Benny joined the Wallace family maritime business which grew to a successful bar pilot business in the San Francisco area.  Bar pilot ships would assist other vessels in safely navigating the waterways of the western coast.  Benny sailed not only with Captain George Wallace as a steward aboard his ships for several years, but also with his son, Captain John Wallace until Benny finally retired in 1932.

Benny served as ship’s steward, and he was also lauded for his skills preparing clam chowder and other foods for ships of the San Francisco Bar Pilots Association.  When he retired, Benny had both a pension and savings from his many years at sea. He lived his final days at the Wallace home in California, and died in 1939.

Benny’s obituary summarizes his life in this way:

CHARACTER OF WATERFRONT DIES – “Death came yesterday to Benny Scribner, Chinese chef, who for 40 years ruled the galley of the bar pilots’ schooner, Gracie S, and who was one of the most picturesque of all of old San Francisco waterfront characters. Benny who was somewhere around 85 years of age never knew who his parents were. He was found by Capt David Scribner of the old bark Abner Coburn, a deserted orphan, on the beach in a South American port. He grew up with Captain and Mrs Scribner and took their name. When the former retired from the sea, Benny became the ward of Capt George Wallace of the J B Wallace. He served both Captain Wallace and his son, Capt John Wallace, outliving both. When he finally retired as cook in the pilot service in 1932, he went to the Wallace home down the Peninsula to end his last days."