My 2nd great grandfather, Samuel Hart, is one of the most intriguing brick walls on my family tree.  To start off with, I’m not even sure that his first name is Samuel, but I’m going to refer to him as Samuel today in this blog post.  He was married to Honora Rouen or Hannah Roughan, and they had two children, Frank and Mary Ann Hart.

So, let’s just start with his name.  Family notes written in 1977 by Louise Nash Egbert, a cousin of my mother, listed him as Justin or Justus Hart.  My mother also had heard that he didn’t like his first name.  The death certificate for Samuel’s daughter, Mary Ann, says that her father was Justus Hart, born in Canada.  And the death certificate for his son, Frank, says that his father was Samuel Hart, born in Canada.  The 1865 New York Census has Samuel Hart listed as Justice Heart living in Schaghticoke.  Since this census includes his wife and both children, I’m fairly confident that this is the right family.  At this point, I am thinking that his name is probably Samuel Justus Hart, in any case, maybe Samuel J Hart.

Next, everything including census information is consistent that Samuel was born in Canada, sometimes also referred to as French Canada.  I also know from family letters that Samuel’s native language was French which, according to the family, he spoke almost exclusively and his wife, Honora, though born in Ireland, was also fluent in French.

The next stumbling block about Samuel Hart also comes from my mother’s cousin, Louise, who wrote that her aunt (great Aunt Margaret, also referred to in an earlier blog post) had noted that “Mr. Hart had lived as an orphan in a lumber camp in Canada.  The cook, who had known his parents, was to tell him about them, but apparently did not before he was killed.” And as you would expect, it is difficult to think that this statement could be verified or corroborated in today’s time.

Samuel Hart was born somewhere between 1825 and 1836 according to census records.  Don’t you love how accurate census records are?

I have not found a marriage record for Samuel and Honora.  However, their eldest child, Frank, was born in 1861 in Coveville in Saratoga County, so it is logical that they were married in 1860 or earlier.  It appears that the couple probably lived in Saratoga County at the beginning of their marriage, but between 1865 and 1880 census records show that they were settled in nearby Schaghticoke in Rensselaer County.

Unfortunately, I have not located Samuel or his wife in either the New York 1892 Census or the 1900 Census which is a disappointment as the family letters indicate that they lived until at least 1900.  Also, it is possible that one or both could have lived their last years in Troy with or near Frank’s family.

Finding any other records besides censuses has been challenging, as well.  I did find a naturalization record for a Samuel Hart in Troy, Rensselaer County, New York showing that on September 12, 1868 he was naturalized.  The naturalization journal page also notes that he was born in Canada and lived in Schaghticoke, so I think this is my Samuel Hart as that is where he lived at the time.

For many years I have been unable to find death or burial information for either Samuel Hart or his wife.  I have been able to narrow down their date of death to 1899 or later, after finding a June 1899 news story reporting that Samuel & Mrs. Hart lost their Stillwater home to a house fire and had to move in with their son, Frank Hart and his family, at least temporarily. 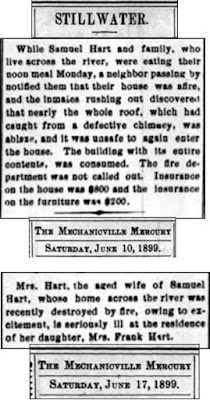 “While Samuel Hart and family, who live across the river, were eating their noon meal Monday, a neighbor passing by notified them that their house was afire, and the inmates rushing out discovered that nearly the whole roof, which had caught from a defective chimney, was ablaze and it was unsafe to again enter the house.  The building with its entire contents was consumed.  The fire department was not called out.  Insurance on the house was $800 and the insurance on the furniture was $200.” – June 10, 1899

“Mrs. Hart, the aged wife of Samuel Hart, whose home across the river was recently destroyed by fire, owning to excitement, is seriously ill at the residence of her daughter, Mrs. Frank Hart.” – June 17, 1899

Last year, I finally found a death certificate that I believe might be Samuel’s.  It is for Samuel Hart, who died April 21, 1902 in the Rensselaer County Hospital in Troy, New York.  The death certificate records that this Samuel was 71 years old, born in Toronto, Canada (near the New York border), was married at the time of his death, and was buried in Schaghticoke the next day.  I think this is probably my Samuel Hart, but so far I haven’t been able to find either Samuel or his wife buried in a cemetery in Schaghticoke.

Notes:
1)  I would love to find burial information for Samuel, and hopefully his wife, which I feel is likely to be found in Schgachticoke, Renssaeler County, New York.  Wish I lived near enough to visit churches and cemeteries, so that I could search …

2)  What about the story that Samuel Hart was an orphan in a lumber camp in Canada and he didn’t know his parents?  I turned to researching the Hart name in Canada, focusing on the French speaking Quebec area, as that seemed to be a reasonable option.

There is actually a very large Hart family in Canada, specifically in the Quebec area.  Aaron Hart (b.1724) and Dorothea Catharine Judah (b.1747) emigrated from England in 1781 and established this prominent Jewish family in Quebec.  They had eight children, including four sons, and their extended family was quite large.

Aaron and Dorothea’s eldest son was Moses Hart, and one historian (Charles Law, author of multiple books on this Hart family) indicates that while Moses was very prominent and wealthy, he had a great number of affairs, mistresses and illegitimate children.  Charles Law notes that Moses “had as many as 18 children that were born out of wedlock.”  Moses even had an illegitimate child named Samuel Judah Hart, born in 1839 with his long time mistress and Irish housekeeper, Mary McCarthy Brown who he married in his later years.  That son, Samuel Judah Hart, however married and lived in the Quebec area with his family until his death in 1861.  It is known that Moses Hart sent his children by Mary to prep school - and that during his life Moses often acknowledged and even lent assistance to a number of his other illegitimate children.

So what do I think?  I believe that our Samuel Hart could very possibly connect in some way with this Hart family in Canada – but we will never know.

3)  Honora Rouen, Samuel Hart’s wife, is just as difficult to nail down as she is also a bit of a mystery.  She was born in Ireland and immigrated as a young adult.  It is said in the family that she was a servant or lady-in-waiting for a well-to-do family and that she was well educated.  Her name is noted on her son Frank’s death certificate as Hannah Roughan.  However, her daughter, Mary Ann’s death certificate records her as Honora Rouen.  It occurs to me that Honora Rouen, or Honore' Rouén as noted in some family letters, could have simply been her husband's French version of her Irish name that he might have preferred …

In 1775 there was growing frustration among many in the American colonies with the conditions of British rule.  In Maryland, a group of elected officials came together in Harford County on March 22nd to author and sign a document referred to as the Bush River Declaration (also called the Bush Declaration or the Bush River Resolution) in a display of frustration with British policies and the blockade of Boston, and to show their support for Colonial rule.  The Bush River Declaration endorsed the actions of the Continental Congress and the signers pledged their support “to our Country” at the risk of their lives and fortunes.  The document would have been considered treasonous, and yet it was signed by thirty-four local representatives just three weeks prior to the Battles of Lexington and Concord which are regarded as the beginning of the American Revolution.

The full text of the Bush River Declaration, adopted and signed on March 22, 1775, reads as follows:

"We the Committee of Harford County, having most seriously and maturely considered the Resolves and Association of the Continental Congress, and the Resolves of the Provincial Convention, do most heartily approve of the same, and as we esteem ourselves in a more particular manner, intrusted by our constituents to see them carried into execution, we do most solemnly pledge ourselves to each other, and to our Country, and engage ourselves by every tie held sacred among mankind to perform the same at the risque of our lives and fortunes."

While the Bush River Declaration did not specifically demand freedom from the British, it was regarded as endorsing more self-government for the Colonies which could well have been regarded as a desire for independence. 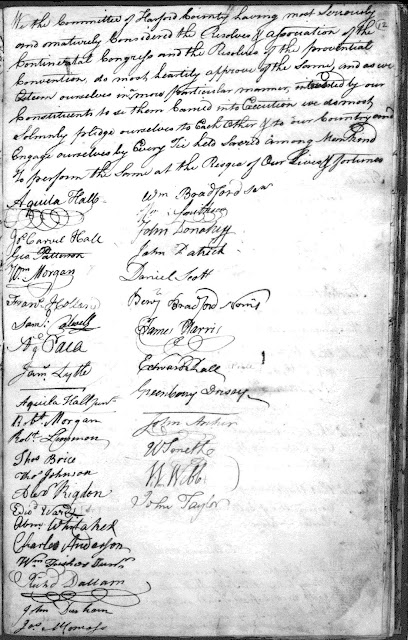 Among the thirty-four committee members and signers was a twenty-five year old named Aquila Hall Jr, my 4th great grandfather.  Signing first, and with the same name, was Col. Aquila Hall, his uncle, who was forty-eight at the time.  The younger Aquila Hall signed with “Junr” probably to differentiate himself from his older uncle.  The Hall family was a wealthy landholding family that first arrived in Maryland from England in the mid-1600’s.  They had much to lose in a conflict with the British Empire.

Aquila Hall Junr, my 4th great grandfather, was born in Baltimore County about 1750 and died in 1815.  He lived through the Revolution to see independence in America and the birth of a new nation. I don’t know his specific role during the Revolutionary War but it is clear to see where his loyalties lied.  If anyone has information or documentation of his activities during that time, I would love to hear from you.

Quite a bit is known about the illustrious Hall family.  If you wish, you can check the many sources that include books such as Baltimore County Families 1659-1759 and Provincial Families of Maryland, along with written and online information about the Bush River Declaration.  And, if you like to join lineage societies, there is The Hereditary Order of the Signers of the Bush Declaration.