The first Snedeker to arrive in America was Jan Snediger, my 9th great grandfather, who emigrated from the Netherlands along with his wife Annetje Ruijs before the mid-1600’s.  Jan Snediger was born about 1608 in the Oldenberg territory in the Saxon Netherlands that is now a part of Germany and known as Amersfoort, a village 14 miles south of Amsterdam.

Jan’s father, Gerdt Snediger was a shoemaker by trade, with two sons and a daughter, Jan being the youngest.  Jan learned the shoemaker and leatherwork trade working in his father’s shop.  However, as a young man, Jan ended up in Amsterdam as a member of the Oldenburg militia assigned to military units under the direction of local political officials and emissaries.

Working in the militia was an uncertain career due to the shifting economic and political times, and Jan, while trained as a shoemaker, would not have been allowed to practice the trade due to local Guild control.  Thus it is believed that Jan made the decision to leave with his wife, Annetje, and possibly two small children for the New World.

Sometime around 1640, the family arrived in New York to settle in the area of Long Island, then known as the Dutch colony of New Amsterdam. Jan was believed to have arrived as a freeman because he was a trained tradesman, and he did not arrive as an indentured servant.  The early Dutch settlers were mostly farmers and tradesmen.

By 1645, Jan was granted a double lot south of the Fort of New Amsterdam where he owned and operated a tavern and tap room.  He was also granted a lot and residence on Flatbush Avenue where he lived for several years.

Later, in 1652, nearby land known as Midwout (meaning Middle Woods) had been parceled and granted to several of the Dutch inhabitants and freeholders.  Jan Snediger was among those having been granted letters of patent for this land where he then built a homestead.  Midwout was one of several Long Island Dutch communities all referred to as New Amsterdam.  Jan was appointed Magistrate in 1654 by Governor Peter Stuyvesant, and was recognized as one of the “Original Proprietors” in the New Netherlands settlement. 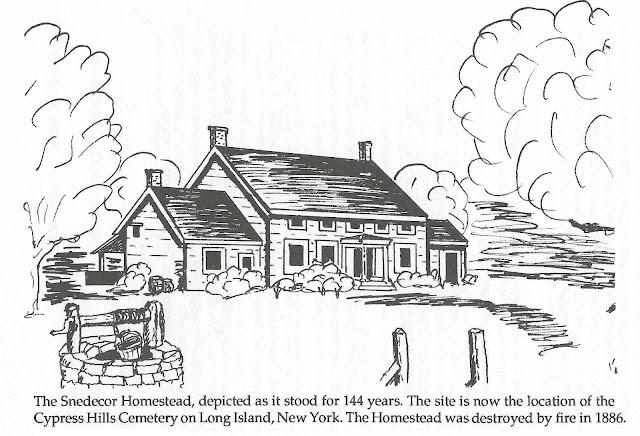 It is believed that Jan married and lost his first wife in Amsterdam, possibly she died in childbirth.  Jan next married Annetje who joined him on the journey to the New World.  Jan had at least five children, one son and four daughters.  Annetje died about 1674.  Several years later in 1677, Jan married Egbertje Hendrickse, a widow.  Jan Snediger died in May of 1679 in the Flatbush area of Long Island, New York.

Anyone interested in reading more about the life of Jan Snedeker might want to read the book titled “The Cadet” by Walt C Snedeker, a descendant of Jan Snedeker, published in 2003.  In this instance, the term “cadet” was used in Europe for a younger son who typically would not inherit and would be expected to create a life of his own.  The book was written as an historical fiction novel, however many of the characters and events are true to the life of our ancestor, Jan Snediger. 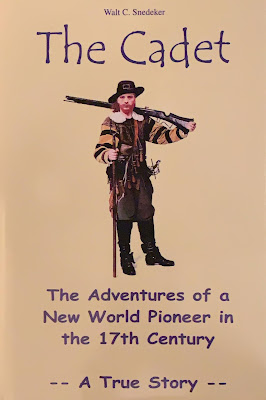 1)  There are many variant spellings of the name Snedeker belonging to the same family, and while the original name did change over time, spelling errors in records for this name are also quite common.

2)  The Snedeker lineage is pretty well documented and available in books and online, as well as records of the early New York Dutch Reformed Churches.  Feel free to contact me if you need help connecting our line back to Jan Snediger.