Aboard a Prison Ship in the Revolution

Nathaniel Dickinson, my 4th great grandfather, was a seaman living in New London, Connecticut in the late 1700’s.  He was married to Elizabeth Bill Dickinson.  Nathaniel not only sailed with privateer ships during the Revolutionary War, he was also aboard a privateer ship that was captured by the British.  And for a time, he was imprisoned on the Jersey, a British prison ship anchored in New York Harbor.

During the Revolution, American privateering became a way for colonists to harass the British for both financial gain and to fight for their cause.  The vessels were armed, and while not naval ships, they were quite effective.  Many privateer ships carried Letters of Marque which was an official authorization from the government allowing privateers to seize British merchant ships, and in return the owner and crew could receive a portion of the sale of the captured ship and its cargo.  Hundreds of ships were commissioned as privateers during the Revolutionary War.

Nathaniel’s experience is revealed by his son, David Bill Dickinson, in a family memorial letter:

“Nathaniel Dickinson served in several of the armed vessels of the United States during the war of the revolution, the Ships Hancock, Beaver and others from its commencement until the conclusion in 1783.  He was wounded and carried a prisoner on board the Jersey Prison Ship, and there remained until a cartel was sent from New London at the instance of his wife, the mother of your memorialist, when his exchange was affected.  During his confinement on board the British Prison Ship, he contracted the disease which ultimately terminated his existence, and he died in the year Seventeen hundred and ninety six leaving his wife and Six Children, entirely destitute of means for their support or education.”
-- “Circumstances relating to the Life and action of Capt Nathaniel Dickinson of New London, State of Connecticut” by David Bill Dickinson; 1842.

Ships logs exist to show that Nathaniel Dickinson was among the crew aboard the privateer sloop the Hancock (noted above) in 1780 and that he earned prize shares. 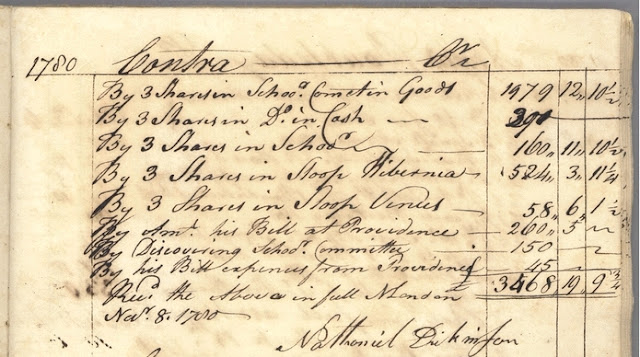 The armed schooner, Lively, was commissioned on March 27, 1781.  Family letters note that Nathaniel was aboard the Lively under Commander Edward Latham of Groton, Connecticut, probably as the Prize Master, when the Lively captured the British schooner Seaflower in April 1781.  But the Lively’s fortunes turned on July 9, 1781, when Commander Edward Latham of the Lively and his crew were captured by the British ship Goodrich.  Latham was known to be a prisoner aboard the prison ship Jersey after his capture, and it was probably also at that time when Nathaniel was on the prison ship. 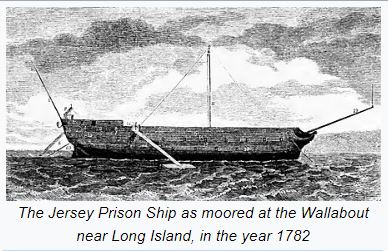 There were several British prison ships and confinement on one was often a death sentence. Many more Colonists died on prison ships during the Revolution than in battle.  David Bill Dickinson’s letter says that his father, Nathaniel, was “reduced almost to a skeleton” before the family was able to purchase his freedom.  Nathaniel died of illness while at sea in early 1797 at 48 years of age.

Among the list of items recorded in Nathaniel Dickinson’s estate inventory, and valued at three-dollars, was a “Picture of General Washington on horseback.”

Notes:
Nathaniel Dickinson was noted in his obituary as Captain Nathaniel Dickinson.  During his privateering days, as a Prize Master, he would be given command of a captured vessel to deliver it to the authorities in port. 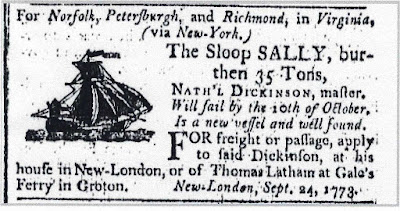 “For Norfolk, Petersburgh, and Richmond, in Virginia, (via New York.)  The Sloop SALLY, burthen 35 Tons, Nath’l Dickinson, master, will sail by the 10th of October.  Is a new vessel and well found.  For freight or passage, apply to said Dickinson, at his house in New-London, or of Thomas Latham at Gale’s Ferry in Groton.  New-London, Sept. 24, 1793.”  - Connecticut Gazette; New London, Connecticut

“If any House-Carpenter or Joiner, a young Man, has a Mind to seek his Fortune over Sea, let him apply to Nath'l Dickinson.  New-London, June 15th, 1784.” – Connecticut Gazette; New London, Connecticut

Henry Philip Hale was the third child of Philip Moore Hale and Mary Ann Brown Dickinson Hale, and older brother to my great grandmother, Virginia Augusta Hale Scribner.  Henry was born April 20, 1843 in Baltimore, Maryland, and died in the early days of the Civil War on August 7, 1861 in Richmond, Virginia.

In 1861, Henry was living in Brooklyn, New York with his mother and four of his siblings.  On his 18th birthday, Henry joined the Union effort and enlisted in New York City.  His enlistment paperwork incorrectly shows him to be 22 years old.  Henry was mustered on May 7 as a Private in the 11th New York Volunteers, 1st Fire Zouaves, Company G.

The 11th New York Volunteer regiment was organized in New York City in May of 1861 as a Zouave regiment under the command of Colonel Elmer E Ellsworth, drawing many volunteers from the ranks of the City’s volunteer fire companies.  The company was known for its unusual dress and drill style.  Like most Zouave regiments, the men of the 11th New York were fashioned in uniforms not typical of the standard Union soldier.  The 11th Volunteers were issued clothing that among other items included light grey jackets, red overshirts and dark blue trousers, and received a red or blue fez with a blue tassel.  In the summer before the First Battle of Bull Run, most of the Zouaves left their jackets in camp due to the July heat.   Private Henry P Hale proudly had his photograph made in his uniform with no jacket.  The photo was taken July 9, 1861 while he was in Alexandria, Virginia, and Henry Hale mailed the photo to his family from his post at Camp Ellsworth the next day. 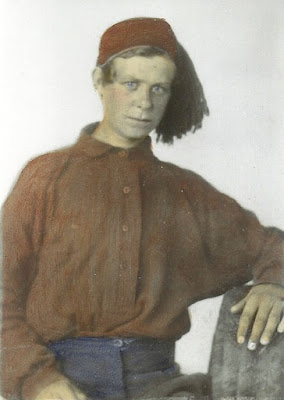 The 11th NY Volunteers, 1st Fire Zouaves, left New York aboard the steamship, Baltic, on April 29 and steamed to Annapolis, Maryland arriving on the evening of May 1.  The next day, the troops disembarked and traveled to Washington.  In Henry’s letter to his family on May 7, he wrote that “we are quartered in the room of Commerce next to the Patent office – the best quarters in Washington”.   And on June 2, he wrote that “We are quartered in the House of Rep. – that is, the one they are just building.”  In that same letter, he said that “The President [Lincoln] received us last night.  He is about 7 foot, he looked like a fool standing with his hat off – “.

The 11th New York Volunteer regiment’s first major combat experience occurred on the morning of July 21, 1861 known as the First Battle of Bull Run near Manassas, Virginia.  It was the first large-scale battle of the Civil War and Henry’s regiment suffered extensive casualties.  Although accounts of the battle differ, most sources list 177 men lost at Bull Run, with 35 men killed, 74 wounded, and another 68 missing and presumed captured.

Henry P Hale was among the wounded Union prisoners taken by Confederate forces to Richmond, Virginia and arriving on August 1, 1861.  Henry was taken to the Ross Factory Hospital located on Main Street in Richmond which was an old tobacco factory building.  Henry wrote a letter to his mother dated August 2 to reassure her that he was fine:

Dear Mother,
I write this to inform you of my whereabouts.  I am still among the living although I was wounded in the Battle of Bull Run, and, I presume, named among the dead in the papers.  It was God's Will that I only got a slight wound in the thigh.  I am recovering fast.  We are treated here with utmost kindness.  Everything is done for us that one could wish.
I hope that War will soon end and we will all soon return home.  I hope Dave [his brother] is successful in finding employment and is doing well.
I have nothing to write about.  I am in a hospital in Maine Street.  Give my love to Grandmother, Sis, Dave and the children.  Goodbye, God bless you all
--  Your Affectionate Son,     Henry P Hale

Even though Henry only mentioned a slight wound in his thigh in his letter to his family on August 2, he died five days later while still a prisoner in the hospital in Richmond, Virginia.   Very likely his wound became infected.

The Hale family must have struggled with all of the conflicting information that they received, not really knowing the true facts, only the reality that Henry never came home.  It appears, though, that the family was informed of Henry’s death by mid-September.   Henry P Hale’s obituary appeared in a Baltimore newspaper on September 19, 1861.

"Died at Richmond. - Henry P Hale, son of Mr. P M Hale, of this city, has died at Richmond, VA, of wounds received at the battle of Bull Run.  His age was 18 years."

Notes:
Understandably, there was much confusion and difficulty with record keeping after the Union devastation at The First Battle of Bull Run.  The Union company muster records show that Private Henry P Hale was killed in action on July 21, 1861 probably because he was missing after the battle.  Union records however noted later that he died in Richmond from his wounds.

On September 25, 1861 both The New York Times and the New York Daily Tribune newspapers printed lists of Union prisoners at Richmond after the Battle of Bull Run.  The newspaper accounting included Henry P Hale’s name twice among the list of wounded:  first as “Henry P. Hale, bullet through head”, and then later in the same paragraph, as “Henry P. Hale, not stated”.  By the time the newspaper was published, the family already knew that Henry had died in the prison hospital in Richmond. 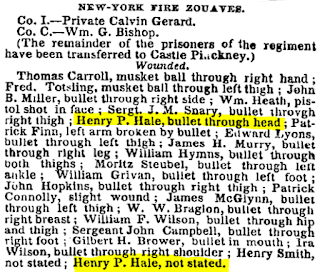 I will likely do another blog post that is simply a transcription of the letters that Henry P Hale sent to his mother and sister in those brief few weeks after he enlisted and before he died.