Three ships' logs for sea voyages made by my great grandfather, Captain David Alba Scribner are held at the Museum of America and the Sea located in Mystic, Connecticut.  The logs are included in the G W Blunt White collection of the library.  I requested a microfilm copy of the logs through the interlibrary loan system, received it, and made copies for my files.  The three logs are for the Ship St Lucie 1870-1872, the Ship St John 1873-1875, and the Ship St John for the later years of 1875-1878. 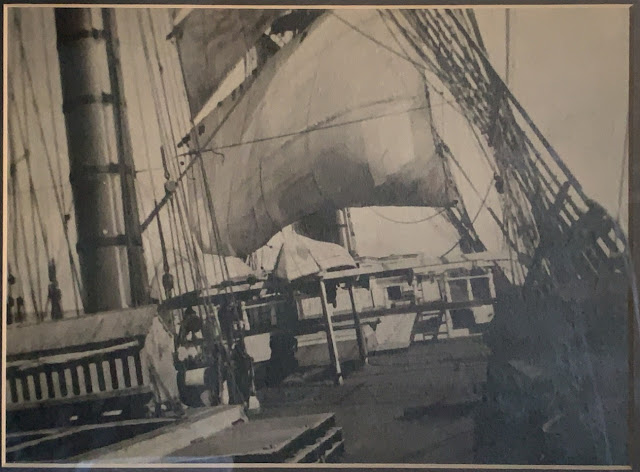 Deck of a clipper ship with sails up.  Photo taken by H D Scribner, date unknown.

The log entries were recorded daily while ships were at sea.  Captain Scribner’s entries were typically about 4 to 10 lines that noted the weather, and changes in the weather, at least 3 times each 24 hour period.  Winds were also noted by strength and direction, the ship’s course, latitude, longitude, and how the sails were set or changes made to the sails.  Also, he always noted when a ship was sighted, the ship’s direction, and if they were close enough to signal he always identified any ship sighted by name, if possible, and where it was headed or the port it came from last.

One 1873 entry noted a problem with the weather and the sails:

“Fresh gale from the North

Succeeded in saving the sail in a damaged condition.

Ship laying to under Fore Top”

And another mentioned a stop at the Pitcairn Islands:

6 PM boarded by some of the inhabitants of Pitcairn Island

In a sobering 1873 entry from the St John logbook, on a trip from San Francisco to Liverpool while near the Cape Horn, Captain Scribner noted that a crewman was lost:

“First part of these 24 hours, fresh gale from NW with a heavy sea

Turned Ship about but could not find him

And in 1875 on a voyage from New York to San Francisco, one lengthy entry in the logbook told the story of a theft problem among the crew:

“Found the crew has breached the Cargo.  Asked all hands what they would say about it.  One Frank Mopey said he was knowing of it.  All hands called aft.  Said Mopey then related that two nights previous Joe Brown  come to him with several bottles of Beltrop? and asked him to take some of them which he (Mopey) refused to do and urging Brown to put them back.  Again, refusing to do it, the bottles had been all hove overboard.  Brown was then called o and said that he was the Guilty one and knew of no others implicated in it.  I then dismissed them all and ordered Mopey’s trunk or Chest searched.  He saying that Brown had the key.  Brown denying it.  Then Mopey said that he (Mopey) had lost it.  Then the carpenter was called to force open the chest.  When opened there was found seven bottles of Bitters hid under his clothing.  Mopey denying of knowledge of any thing about the affair but he was seen at 2 AM to go below with two bottles and returned with several other lots so I have no faith in Mopey.  Took the chest into the Cabin after giving the Man his clothes.”

Log entries occasionally, when the weather is warm and calm, include notes of having the crew painting the ship, repairing things and sometimes included a comment about stoning the deck.  At the end of the journals, there was also a section of accounting ledgers showing maintenance and expenditures for provisioning the ship when in port.

Below are 1905 photos of the clipper ship, St David, which was a sister ship to the St John and St Lucie along with the St Frances and St Charles, all similar in style, and built by Chapman & Flint in Bath, Maine.  David A Scribner captained all of these ships at some time during his career.  He first sailed the St Charles in 1869 as the Chief Officer, and was named Captain by 1870, sailed the St Lucie and the St John alternately between 1870-1878, the St David from 1878-1884, and the St Francis until 1893. 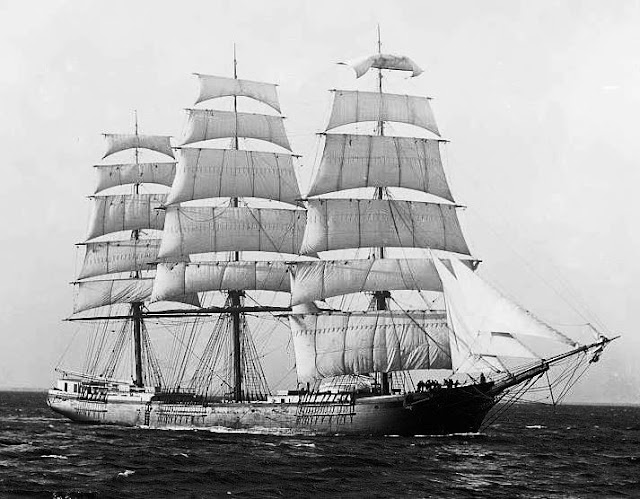 Below are some photos that I took of the below-decks of the USS Constitution when Guy & I were in Baltimore on vacation in 2019.  The Constitution was, of course, larger than the clipper ships but similarly crowded with crew, cargo, goods and supplies below deck. 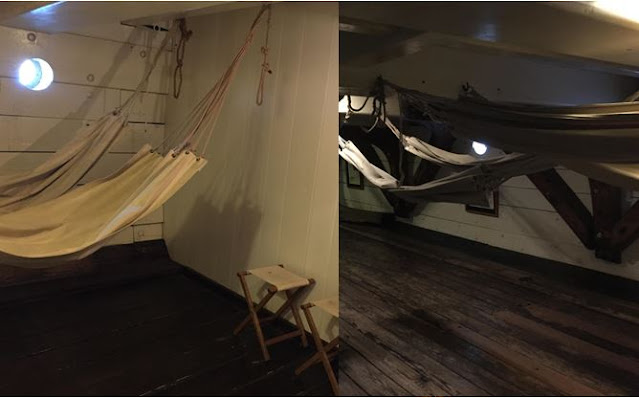 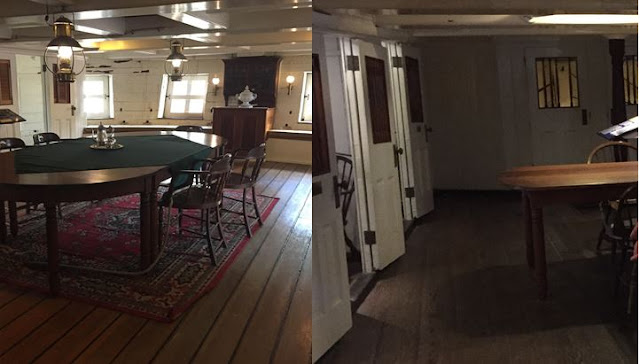