Henry Hale is one of my ancestors that I know almost nothing about.  He is one of my 3rd great grandfathers and he first appears when he married, Martha Susannah Hall (known as Susan Hall) in September of 1800 in Baltimore County, Maryland.

“On Thursday evening last, the 11th instant, was married, by the Reverend Mr. Wilmer, captain Hale, to miss Susan Hol, daughter of Aquila Hall, esquire, at his seat on Long-Green, Baltimore county.”

I have not been able to find anything about Henry or his family that I can definitely tie to him before his 1800 marriage.  I believe that it is probable that Henry was from the Baltimore area or they might have made note of where he was from in the wedding announcement.  Also, a couple of census records for his children indicate that their father, Henry, was born in Maryland.

Henry Hale died in 1841.  The probate paperwork for his estate leaves everything to his wife, Susan, but the inventory contains only household possessions, farm equipment and animals – no property or residence. This isn’t surprising as Henry & Susan lived on property in Baltimore County that Susan’s father had granted to them for their life in his 1815 will.  Henry Hale’s will seems to indicate that he did not have any other land or property at the time of his death.

Another problem is confusion over what year Henry Hale was born.  One family history document written in 1897 says Henry was born in 1782, however that would make him only 18 years old when he married, almost five years younger than Susan, and already a Captain – all highly unlikely in my opinion.  Henry’s gravestone in Fork United Methodist Cemetery is inscribed “Capt. Henry Hale, born Oct 11th 1755? died May 11th 1841” – however that headstone is very difficult to read, especially the birth year.  And the last source is Henry’s obituary found in a Baltimore newspaper, noting that he was 67 years of age at his death in May of 1841 – which means he was born in 1773 as he died before his October birthday that year.

I actually believe that the birth year of 1773 taken from Henry Hale’s obituary might be the correct date, probably making his birth date as October 11, 1773.  If born in 1773, Henry would have been 27 and Susan 22 years when they married.

One reason I strongly believe that Henry was born in 1773 instead of 1755 are the 1810 - 1840 census records.  These census records are for the time after Henry’s marriage and before he died, and in these years individuals and their ages aren’t listed by name but simply tabulated by number in groups.  All four of these years’ census records show Henry Hale as the head of household and individuals are grouped by age and gender.  For example, the 1810 census shows Free White Males under 10 yrs: 4 (which would be Henry & Susan’s oldest 4 sons), and Free White Males 26-44 yrs: 1 (Henry at 37 years, if born in 1773).  In all four censuses there is 1 Male noted in the correct age category if Henry had been born in 1773.  Also in all of these censuses, no male is recorded in any older age category, as should have happened if Henry had been born in 1755.

The wedding notice, his obituary, and his gravestone all title Henry as “Captain” Henry Hale – but was he a military captain or a sea captain?  If he was a military captain, and if Henry was born in 1773, then he was too young to be involved in the Revolutionary War.  Though Baltimore did have a County Militia, and in 1779 there were four Hales on the muster roll:  Sgt Nathan Hale, and Henry Hale, Nicholas Hale son of G, and Nicholas Hale Jr listed as Privates.

The other option is that Henry might have been a sea captain.  Henry and Susan had six sons, and one of them, Philip Moore Hale, lived his life as a mariner captain sailing out of the port of Baltimore.  Thus is it possible that his father was a mariner, as well.

The 1798 Baltimore County Tax Assessment includes two different mentions of a Henry Hale: a Henry Hale, occupant on Ezekiel Cole’s lot, and a Henry Hale, dwelling on Thomas’ lot.  Either of these could very well be my Henry Hale as it is only a couple of years prior to his marriage.

And last, sometimes you can get a clue to names in an earlier generation when you look at the names chosen for a couple’s children.  Many times names were chosen by the couple to honor their parents or close family.  However, in the case of Henry Hale and his wife Susan, I believe that their children were mostly, if not all, named for individuals in Susan Hall’s family:

If anyone can help me find more information on my Captain Henry Hale, I would be forever indebted to you as his family is a mystery to me!

1.  The 1909 obituary for one of Henry’s grandsons, Philip Moore Slicer, claims that “His mother Susan Hall Hale [sic; Susan was his grandmother], was a direct descendant of Sir Matthew Hale, for many years Lord Chief Justice of England.”  Slicer’s mother was actually Delia Moore Hale Slicer, daughter of Susan and Henry Hale.  This statement when corrected, and by extension, implies that Henry Hale was a direct descendant of Sir Matthew Hale.  IF that is so, I haven’t figured out the line of descent from Sir Matthew.

2.  Verbal family stories tell that our Hale line is related somehow to Nathan Hale, the American patriot and spy who was captured and hanged by the British during the Revolutionary War.  However, I have been unable to make that connection.  The patriot Nathan Hale was born in 1755.  Nathan Hale had no children, and while Nathan had 8 brothers, none were named Henry.  I also have not found any 1st or 2nd cousins named Henry in Nathan Hale’s family.

It is known that Nathan Hale was much beloved in New London, Connecticut where he taught school prior to the Revolutionary War – and the wife of Philip Moore Hale (son of Henry & Susan, and my 2nd great grandfather) was a native of New London, so it is possible that discussion of a Hale connection might have made for entertaining family conversation while lacking a factual basis.

Another Nathan Hale possibility, though extremely remote, is the inclusion of a Sgt Nathan Hale (not the same Nathan as the patriot) in the 1779 Baltimore County Militia list.  We could speculate that IF our Henry Hale was the son of, or related to, this Sgt Nathan Hale – then the family story could have simply morphed into referencing the “wrong” Nathan Hale?

From Clones to Brooklyn

John Smith and his wife, Margaret O’Neill Smith, my 3rd great grandparents, were Irish immigrants who settled in Brooklyn, New York in 1849.  The Irish people and the Irish economy had suffered for several years with famine.  The Smith family boarded the ship “New World” in Liverpool along with over 400 other passengers.  The ship arrived in New York City on September 21, 1849.  According to the ship’s manifest, the Smyth family group included:  John 60 years, Margaret 40 years, Ellen 20 years, Robert 19 years, Joseph 18 years, Francis 16 years, Margaret 15 years, Mary 10 years, and Elizabeth 1 ½ years. 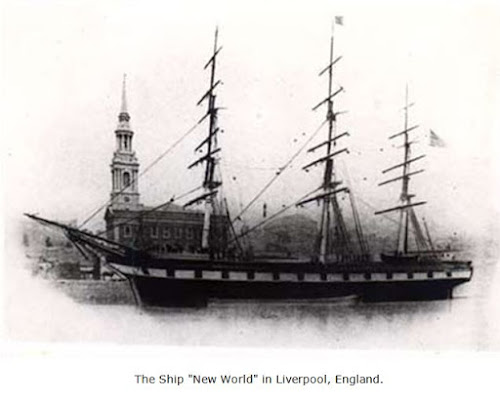 Before the family emigrated, they had for many years resided in Clones, County Monaghan, Ireland.  John is included in the 1846 local Ireland commercial business directory where he is listed as “John Smith, coach & car maker, Cara St, Clones.”  The 1849 ship manifest also listed John with the occupation of coachmaker.   And after arrival in New York, John appears in the census and the 1850-1851 Brooklyn City Directory as a coachmaker.

The family evidently had enough early success to place advertisements in the Brooklyn Daily Eagle newspaper in 1854 for Carriages from Smith & Sons, Carriage Factory.

By 1860, the Smith family business appears in the U.S. Federal Census Non-Population Schedule as a "Carriage Manufactory that produces 30 Light Waggons annually and employs 12 men."

While the family appears to have enjoyed success during their early years in America, there was also sadness.  In 1854, one of the sons, Francis, died after a lingering illness. He was only 20 years old.

The first half of the 1860’s and the years of the Civil War proved very hard for the Smith family.  Ellen, the eldest daughter, died in 1862 at 28 years.  Only a year later in 1863, John Smith, the family patriarch, died at 70 years.  And in 1864, the husband of another daughter, Margaret Smith King, died after being wounded in battle, leaving her with four young children.  Margaret’s husband had been a carriage painter in the family business prior to joining the Union effort.

My family line descends from the youngest child of Margaret Smith King, the young Civil War widow.  This child was only 2 years old when her father died in the War.  The 1870 Census shows Margaret Smith King as a widow with her four children and notes her occupation as “ironing & washing.”

As you can imagine, with a name like John Smith, this family has been very difficult to nail down in my genealogy work.  Also, the birth dates for the Smith family are a mess to figure out.  The ages on the passenger manifest, subsequent ages on censuses, and ages in obituaries and death certificates all have a wide variance.  In the end, it is only a guess.

For more information on the family of Margaret O’Neill Smith, see my May 6, 2020 blog post “Obituary Clue.”

A future blog post will share the story of Margaret Smith King’s husband and his Civil War experience.