Year as a Union Prisoner

Joseph Hughes, my 2nd great grandfather, was born and raised on a small farm in Camden County, North Carolina.  On May 30, 1861, Joseph enlisted to fight for the Confederacy at the age of 24.  He signed up for a 12-month period as a Private in Capt G G Luke’s Independent Confederate Company.  Joseph was married to Mary “Polly” Gibson, and possibly they had married just prior to his enlistment.  The marriage could have been escalated by the war that had just begun.  Only weeks earlier on April 12th, the Confederates had bombarded Union soldiers at Fort Sumter, South Carolina.

Family history notes written in the 1970’s by my mother’s cousin, Esther Rippard Bradshaw, stated that Joseph Hughes “was captured by the Yanks at Hatteras and returned home a year later” – a comment I was able to verify only in recent years as a great many Civil War records have been added to online digital collections.

By late August of 1861, just three months after enlisting, Joseph Hughes found himself close to home fighting as an infantry soldier in the Battle at Fort Hatteras, North Carolina which was less than 100 miles from Camden.  On August 29th, after an intense battle, the Confederate troops surrendered and the Union experienced its first victory of the Civil War.  There were 691 Confederate soldiers captured at Hatteras and taken as Union prisoners.

Union records document Joseph Hughes as a prisoner with the rank of Private belonging to the Confederate regiment known as the North Carolina Defenders.  He is recorded as having been captured on August 29, 1861 at Hatteras, North Carolina.  He was indeed “captured by the Yanks.”

Confederate records show that on September 15th, and while still a Union prisoner, Joseph Hughes had been officially transferred out of Capt Luke's Independent Company and into Capt Luke's 1st Company H of the 32nd  Regiment, also known as the North Carolina Defenders.  This transfer appears to have been simply a re-organization of the Confederate troops.

By November, and still a Union prisoner, Joseph was taken to Fort Warren located on Georges Island in the Boston Harbor in Massachusetts.  Union records reveal that Joseph was paroled at Fort Warren, near Boston, and then transferred for exchange to Fort Monroe, Virginia in December 1861.

Prisoner exchanges between Union and Confederate forces were common early in the Civil War but had mostly ceased by 1863.  I have no information on Joseph’s treatment or conditions of confinement, though times were hard and the northern winter was surely cold and difficult for the southern soldiers.

After the exchange, Joseph returned to his unit, the 1st Company H, 32nd Regiment of North Carolina, for the remainder of his enlistment term.  Joseph Hughes was included as present and accounted for on the muster roll when the company disbanded on April 2, 1862 at which time he was officially discharged from the Confederate Army. 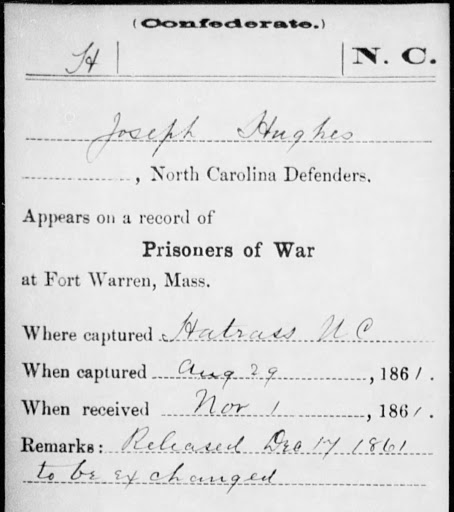 Joseph’s wife, Mary “Polly” Gibson Hughes was pregnant during the time he was captured and held as a Union prisoner.  On April 7, 1862, my great grandfather, Luke G Hughes was born and named in honor of Joseph’s former commanding officer.

Aunt Esther’s family history notes also indicate that John Hughes (Joseph’s father) “had a peg leg”.  Joseph’s death certificate confirms John Hughes as his father, as well as census and probate documents all of which indicate that John was a farmer.  However, I have never found anything about John having lost a leg.

I would love to hear from anyone who might have more information on this Hughes family.

My great grandfather, David Alba Scribner, was a clipper ship captain that made many sea voyages in the second half of the 1800’s leaving the eastern seaboard or sometimes Liverpool, England and sailing around the dangers of Cape Horn to turn north sailing for either Honolulu or San Francisco.  These trips often took him into the area of Pitcairn Island.

Pitcairn Island is a small southeastern Pacific island well known in history and also by the 1935 film, Mutiny on the Bounty starring Clark Gable.  The HMS Bounty was a British naval vessel that left England in 1789 heading for the West Indies to collect breadfruit plants.  The ship and crew spent several months ashore in Tahiti and were reluctant to leave when the captain, William Bligh, decided that it was time to continue their mission.  In the weeks ahead at sea, conflicts, abuse and harsh punishments escalated between the captain and the crew.  Within three weeks, several crewmen led by Fletcher Christian seized control of the ship and put Captain Bligh and many of the crewmen that were loyal to him adrift in the ship’s open launch.

Captain Bligh would make it back to England, and in 1790 another ship was sent to capture and return the mutinous crewmembers for court martial.  However, a small group with Fletcher Christian remained undiscovered on Pitcairn Island until 1808.  After the mutiny, Fletcher returned to Tahiti on the Bounty.  And when the Bounty later left Tahiti, aboard were 9 mutineers, 12 women with 1 child and 6 men from Tahiti and neighboring islands.  It was this group that first arrived at Pitcairn Island where the ship was unloaded, stripped of anything useable, and then destroyed by fire.  By the mid-1800’s, less than a hundred descendants of these first inhabitants still lived on Pitcairn Island.  Ships began to occasionally stop at Pitcairn Island to drop off mail or to bring needed supplies, gifts and aid for the Islanders, as the island was no longer as fertile as it had once been. 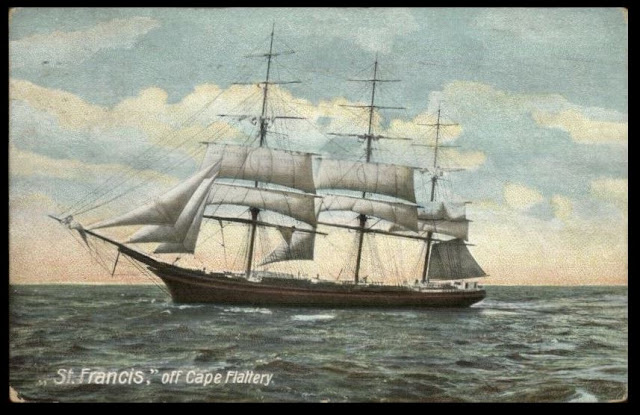 In the book titled Mutiny on the Bounty and the Story of Pitcairn Island 1790-1894 written by Rosalind Amelia Young, a descendant of one of the mutineers, she wrote:

“… Captain D A Scribner, of the American ship St John which arrived at the island in March, 1876.  The captain was a very dear friend of the islanders, having made repeated calls to the island before.  He was entrusted with a large mail ... The organ was brought by Captain Scribner, directly on its being landed it was lifted on the shoulders of a few strong men and borne by them up the steep path, nor was the heavy but precious burden set down until they reached the little thatch-roofed church, where it was placed beside the reading table.  All the inhabitants, old and young, gathered around while Captain Scribner played, “Shall We Gather at the River”.

In the years ahead, Captain Scribner continued to visit Pitcairn Island whenever possible, with his wife and children who accompanied him on his voyages.  They always looked forward to those visits as the family had many close friendships among the Pitcairn Islanders.  Photos of Thursday October Christian Jr (grandson of Fletcher Christian) and Mary Warren, Thursday’s granddaughter, are included among photos of friends and family kept in Captain Scribner’s shipboard photo album.  And, as late as 1939, Mary, the youngest child of Captain Scribner, was still writing letters to Arthur H Young on Pitcairn Island. 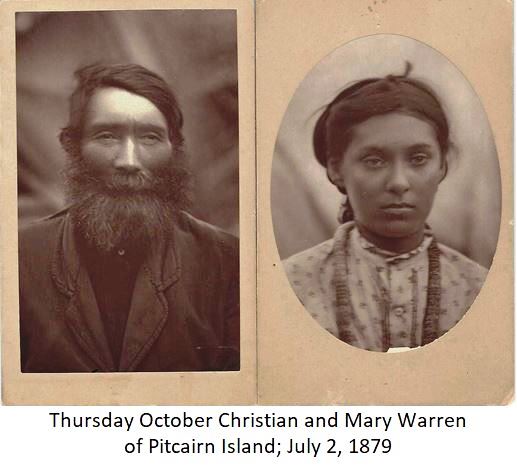