Delivery of a Polio Vaccine

I'm going to bring us back into more modern times with this blog post.  During all of the news and commentary about vaccines and public health this summer, I read a social media post written by one of my brothers about our family connection to the polio vaccine drive in the early sixties, and I decided to share the story in this blog post.

While I don’t spend much time with social media, I do periodically check and read family posts where I enjoy seeing the photos and family activities found there.   One morning, I read a post written by one of my brothers of his memory about the polio vaccine.  He wrote:

"My father was a fighter pilot in Yuma, Arizona in 1960 and one of his jobs was to fly in the polio vaccine that was designed to be on sugar cubes.  He flew in the vaccine for not only the base there in Yuma but for the entire town of Yuma and the surrounding areas.  He was honored by the town of Yuma and my family were the first to receive it in the town.  I was very proud as I had a very good friend when we lived in Pensacola who has Polio and I would wish it on no one ... "

While I personally remember the excitement and novelty when our family received the polio vaccine, I either was not aware of or forgot that there was a connection with my father transporting the vaccine to our community.

I do remember my brother’s friend in Pensacola, Florida who had polio.  We all often played neighborhood kickball in the street on our block.  It was sort of like baseball where you kicked a soccer-sized ball that was “pitched” to you and then ran the bases hoping to score a run without getting put out.  While our friend had suffered from polio in his younger years, it left his legs impaired and he used crutches.  But he could sure wallop that ball with one of those crutches, and then make it around the bases in no time!

My sister also read our brother’s post about the connection to the distribution of the polio vaccine, and she took it one step further and decided to try and find out more.  Her research resulted in finding a newspaper article on the front page of the Yuma Sun Newspaper that was printed on Sunday, April 29, 1962. 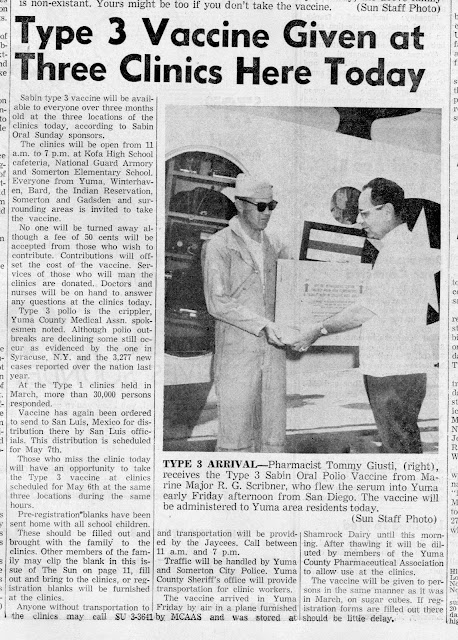 Finding a good copy of this news article that I could use for the blog story was a challenge, one that frequently confronts all genealogists.  I found that the newspaper article existed with an email from my sister that included the name of the newspaper and the publication date.  Her email included the link to https://www.newspapers.com/newspage/47097621/  where we could read the headline and see that there was a photo of Dad in front of his military plane delivering the vaccine.  Neither she nor I had a subscription to that newspaper database, however, so we couldn’t get a good image that allowed us to read the text of the entire story.

Next I found that one of my sisters-in-law had a subscription to that database, and she was most gracious about sending me the image.  But as with many newspaper archive images, it was poor quality and quite grainy.

So my last effort to obtain a clear copy of the article was to contact the Yuma Public Library and ask for help.  I sent an email explaining what I was looking for and what I intended to do with it, and that very same day a kind and thoughtful librarian had sent me an excellent copy of the article!  As genealogists, we are forever grateful for the generous help of many wonderful librarians.

A big thank you to all of the members of my family, and a thoughtful librarian, that helped me flush out the story for this blog post.