My Gram, Theresa Eugenia Gordon Scribner, known as “Jean”, was born in Brooklyn in 1888, the fourth child of John Calvin Gordon and his wife Helen King Gordon.  Her mother was the daughter of Irish immigrants.  John was a carpenter in his younger years, and a local Brooklyn, New York builder by the time that Jean was born.  The couple had six children between 1883 and 1902.   In 1912, at the age of 24, Jean married Henry “Harry” Dickinson Scribner and they made a home in Brooklyn. 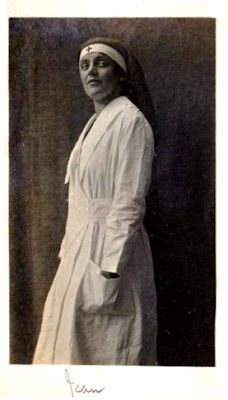 It was several years after they married before Jean and Harry’s first child, Virginia, was born.  In recent years, I have learned that Jean spent some of that time working as a nurse or Red Cross worker.  This was during the time of World War I, and I expect that many wounded soldiers were returning home for medical treatment.

My Gram was always quite proud of her early family history connections.  One Christmas I received a cute small purse that was made with the blue & green wool of the Gordon clan tartan – I still have it.  My brothers got Gordon tartan ties that same year.  Gram also knew that her grandmother was a Snedeker and that her Snedeker ancestors were early New York settlers in the Oyster Bay and Flatbush areas dating back to the 1600’s [see the blog posts for An Early Snedeker Immigrant, February 2021, and Echoes of a Past Epidemic, April 2020 for some of her Snedeker family history].

Jean’s mother, Helen King Gordon, died unexpectedly in early 1919, possibly from the Spanish flu epidemic, while visiting one of her daughters, Lillian, in Washington, D.C.  After that, Helen Marie, the youngest Gordon sibling, came to live with Jean and Harry for a couple of years until Helen married.

Jean and Harry had three children during their early years in Brooklyn, and later moved the family to a home in Huntington, Long Island.  In 1943, Harry died when my father was 19 years old.  Jean continued to live in their Long Island home for another 27 years.  Theresa Eugenia Gordon Scribner died in late 1970. 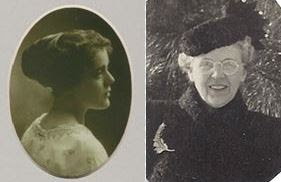 My memories of my Gram were limited because as a military family, we never lived near New York.  There were always phone calls with my parents, and occasional trips to New York to visit, probably over the holidays or summers, and several times that she came to visit us when we lived in Florida, Arizona and New Mexico.  I remember her lovely home, a grandfather clock sticks in my mind, and also big holiday meals, Thanksgiving, Christmas or both in her dining room.

Gram was always quite proper, and we usually had to do a lot of spring cleaning before she arrived at our home for a visit; and then once she arrived, we had to be on our best behavior.  It sounds like she was difficult to get along with, and maybe she was, but I’m not sure that was really the case.  I remember that Gram was kind, and I think that everyone was just careful because we knew that she had high expectations for most everything in life, and my brothers, sister and I simply weren’t around her enough to be really comfortable with her.

I always knew that Gram was a generous person.  Each birthday each of us would get a card with a little cash, and she would send each of my parents a generous check on their birthday with clear instructions that they were not to spend the money on family needs, but were instead to buy something special for themselves.  I remember that my mother would cash her check and then keep her birthday money in an envelope in her dresser.  Sometimes it would be months before she spent it.  I can remember shopping with Mom when she would decide to buy something with her birthday money – it was a real treat for her.

Another thing that my Gram very much believed in was for her granddaughters (she had 3 granddaughters and 7 grandsons) to know that we should always be willing to, and able to, support ourselves.  Good advice from someone who spent much of her life as a widow.

I recently came across a note that Gram wrote to me in 1970 while I was in high school and living in New Mexico.  In the note, you can also tell that she felt the loss of our family not living near enough to see her very often.  I must have sent her a school picture.  It reads:

“Dearest Jane, Thank you for the darling picture of you, it is nice to have and see how you have grown up, very pretty indeed; if I may say so, without you thinking of me as a foolish proud Grandma, but I have missed the pleasure of living near enough to enjoy those early years... Take care of your parents and much love to all.  Gram”

Another Gram story had to do with my desire to get my ears pierced in high school.  The answer was definitely not until I was 18 years old, and was accompanied with the comment that “Your Gram would roll over in her grave.”  And, yes, I had my ears pierced once I turned 18.